An actor needs to be versatile and Puja Sharma who plays the character of Chanda in Mere Angne Mein just proved it. 25 years old Puja who hails from the steel city, Bokaro in Jharkhand recently did a scene where she had to smoke a cigarette. Puja who had ever smoked in her life took up the scene with a positive attitude. Not just she smoked on screen but to master the perfection of a chain smoker Puja for 4 days observed people smoking and practiced the same on sets.

â€œMy character Chanda has turned negative in the show and she smokes and drinks in the house. She is very raw and blunt and I wanted the same to come out in my shots as well. Hence I decided to smoke like a beedi and not a normal cigarette. I observed aam aadmi on the roads of Mumbai who smoke beedis and took that up for the scene. It was difficult and required by directorâ€™s help as I am not a smokerâ€,Â says Puja.

Infact Puja was a little uncertain in the start as she comes from a small town of Bokaro and people take and understand things differently there. But her family supported her for this scene and the results came out simply perfect.

Talking about the track for the smoke scene, Ammaji find cigarette packets in the house and suspects Riya or Shivam to be smoking owing to the present chaos going in the coupleâ€™s life. But later we find that it was Chanda who was planning and plotting everything since the beginning. Chanda smokes and drinks and talks to her boyfriend in her room so that no one can come to her the truth. Will Riya be able to unmask this and bring Chandaâ€™s reality in front of Ammaji and the members of Shanti Sadan? 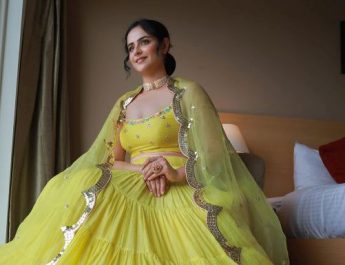 Prachi Tehlan dons yellow as she begins with Mamangam promotions; seeks blessings at a temple